Imagine Thrilling Your Audience With A Horror Movie Star, The Former Mayor Of Hell, And The Mesmerizing Master Of The Strange And Unusual!

Ron Fitzgerald, Master of the Dark Realm, is an Actor and Gotthic Illusionist who delivers what he calls ” dark, sticky fun”! Ron is the only dark/shok illusionist that has actually acted in multiple Horror movies, which gives him his uniqie place in the entertainment industry. Fitzgerald has appeared as a lead and supporting actor in the feature films “The Item”, “The Thirsting”, “Blood Gnome”, “MAGUS”, “Dracula’s Orgy of the Damned” , Arkham Sanitarium: Soul Eater and “The Devil Frame” as well as others, with more on the way. In addition, Ron Fitzgerald has co-written, co-produced and stars in his own groundbreaking Horror feature film “Dark Realm”, which is an artistic blend of his stage show of Gothic Illusons and a Horror film narrative, and can now be seen on Amazon Prime Video. Fitzgerald is also featured in the shocking documentary film “National Vampire”, which is a look into the undergroud Vampire cuture in America. Master Fitzgerald has performed his wickly fun and dark illusions from Hollywood’s The Magic Castle to Hong Kong for it’s Halloween festival, and even in Hell, as Fitzgerald was Mayor of Hell, Michigan for a day! (Twice actually!) Master Ron has appeared on national television and at numerous dark culture and alternative events and venues, which includes Fitzgerald being the only illusionist to ever perform on the second stage at Lollapalooza. All with his wickedly fun, funny and mysterious, theatrical style of sinister Illusion in his live stage show “Fitzgerald’s Realm of Magic”, which includes Master Ron eating razor blades as well as decapitating and cremating his lovely companions, among many otehr deliciously dark acts of madness and mystery! Ron is also featured in the supernatural comic book series “Haunting Tales of Bachelor’s Grove” and this Dark Artist previously hosed his very own cult classing cable TV show “Fitzgerald’s Realm’! One thing is for sure, Ron Fitzgerald is so much dark, sticky fun, he’ll leave you screaming for more! 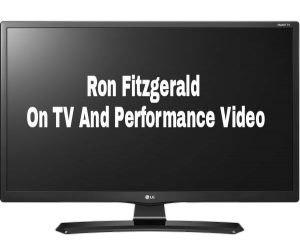 See what shocking things Dose Magazine has to about Master Ron  Fitzgerald!

“Fitzgerald is so much Freaky Fun he’ll leave your audience screaming for more!”