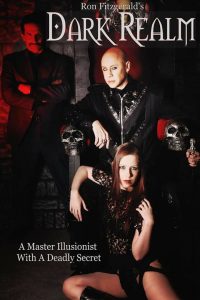 Are you ready to discover dark, sticky fun?

The award-winning, Dark Realm, is the unique combination of Ron Fitzgerald’s dark, theatrical Gothic illusion performances artistically blended with a provocative Horror film narrative. It also has some amazing music in this groundbreaking movie that has been called Entertainment Alchemy!

“This enticing gem is also an ode to the darker elements of theatrical illusions, immersed in occult imagery/ideology, fetishism, and gore. A delightfully sinister soundtrack, featuring the music of Voltaire, House Made of Dawn, and The Damn Bats (to name a few), captures the same undeniable grittiness of the film itself.”
— Reel Reviews

See some of Ron Fitzgerald's television performances, interviews and movie trailers, along with other Media resources in the MEDIA DUNGEON
Join The Realm!